Lately there’s been a lot of negative focus on digital/social media “disconnecting us” from each other. Screens are being blamed left and right for having a negative effect on our lives. Seeing that we’ve made a career out of using digital and social media to do more good in the world and educating others on how to do the same, we felt compelled to respond. So we made a video inspired by, or rather–uninspired by, a spoken word poet who made a video called, “Can We Auto-Correct Humanity”.  We immediately re-wrote another version of his negative ode to digital media and focused only on the positive. A few days later in a production meeting, our team had just agreed to start making at least 1 video a month together that’s our own personal project, not a partner or client or anyone’s else’s. That anti-digital humanity video was still fresh so we all agreed on making it happen, set a date to shoot the following week, recorded the voiceover the next day, and shot the entire video on an iPhone in one continuous take (no editing). 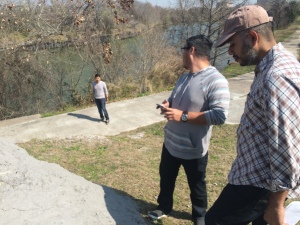 It took us about 4 hours on the day of the shoot to get it right. With no prior rehearsing and under Art’s direction, we ran through a few practice runs until we all remembered what we were supposed to do and at exactly what time. It was pretty funny (and fun) to experience, considering we’re always on the opposite end of the cameras. Art did most of the storyboarding, shooting and directing with a little help from Nelson who also played 1 of 3 main on-camera roles. Jessica did the writing, voiceover and also played an on-cam role. Rolo was on-camera and we had some fun with his mini drone, although those shots didn’t make the cut, lol. (We couldn’t get a steady shot with all the wind outside and the battery life on that thing made it nearly impossible.) Since we did it all in one take we had to get creative with our roles and a lot of what you can’t see behind the scenes is us running to our next mark while the camera switches from one person to another.

We won’t go into any more specifics about the message of the video, we think it speaks for itself.
So enjoy… A Response to: Can We Auto-Correct Humanity.

What's on your mind? Cancel reply

The goodness we’re up to…